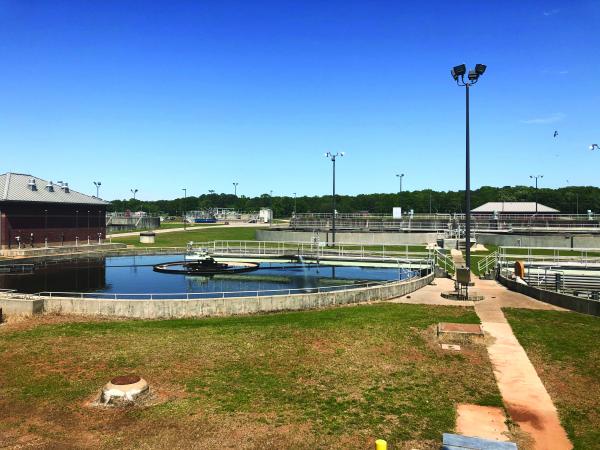 Madison Utilities’ willingness to invest in strategies and the latest technologies is a key factor in the success of its wastewater treatment plant in Madison, Alabama.

One need look no further than the treatment plant’s digester project upgrade to see the value of the plant’s forward-thinking approach at work. The upgrade involved the replacement of five Positive Displacement (PD) blowers with four, high-speed Inovair integrally geared blowers for aerating the digesters. With fewer – and smaller – blowers the plant saves tens of thousands of dollars in energy costs per year. The blowers also offer flexibility to cost-effectively adapt to the need for increased water treatment in the future.

For Madison Utilities Wastewater Manager Mark Bland, the ability to do more with less is about adapting to change for the benefit of ratepayers.

“It really helps to have a team that’s willing to accept change,” Bland said. “That’s the hard part because you’re putting trust in the technology. But the better plant operators are the ones who are willing to change.” 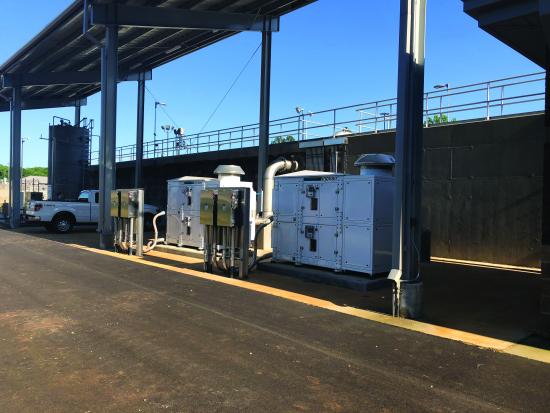 Located in Madison, Alabama, and originally built in 2002, the Madison Utilities wastewater treatment plant is a Class B solids 8.25 Million Gallons per Day (MGD) activated sludge plant with an average daily flow of 6.5 MGD and a peak capacity of 24 MGD. The plant serves approximately 55,000 residents.

Throughout the years the plant launched several upgrade projects in response to a rapidly growing population driven by a bustling economy supported by major companies in the information technology, aerospace, and automotive industries, among others.

The main systems found at the plant today include the headworks operation with a vortex grit removal system, three primary carousel-type aeration basins and three secondary clarifiers for primary treatment; a Return Activated Sludge (RAS)/Waste Activated Sludge (WAS) pump station; six aerobic digesters for processing WAS;  and a dewatering facility with a centrifuge for drying the Class B solids for use as fertilizer. The plant also uses both peracetic acid and ultraviolet disinfection techniques as part of its wastewater treatment process.

In 2018, Madison Utilities increased aerobic digester capacity at the plant by adding two digester tanks to four existing tanks to keep pace with increased wastewater treatment needs. The project also included the addition of the new blowers and fine-bubble diffusers to its aerobic digesters in place of coarse bubble diffusers, as well as Dissolved Oxygen (DO) probes and airflow meters for increased monitoring and measurement.

“It gets to be a bit of a numbers balancing game,” Bland said, regarding the plant’s goals for efficiently processing WAS and thickening sludge for application as a Class B solid. “Our goal is to process the sludge as energy-efficiently as possible, while at the same time, reducing the amount we pay for solids removal.”

Each day, the Madison Utilities treatment plant’s aerobic digesters process approximately 80,000 gallons of Waste Activated Sludge (WAS), which is generated by the biological treatment process.

Within the digesters, activated sludge is continuously aerated by aeration blowers and fine-bubble diffusers and mixed with the wastewater until desired Biological Oxygen Demand (BOD) levels are reached. At the end of each cycle, aeration is stopped to allow the sludge to settle to the bottom of the digester tank floor. The process leaves clear water at the top of the tank, which is then decanted and pumped back to the headworks for further processing. Sludge is pumped to the dewatering facility to produce Class B solids, which meet the required Specific Oxygen Update Rate (SOUR) before being trucked off site.

Before the digester upgrade project, the plant’s digester were equipped with five, fixed-speed 125 horsepower (hp) PD blowers. Of the five blowers, the plant dedicated one blower to each digester tank with the fifth blower serving as a standby unit. During normal conditions, the plant operated two blowers at near capacity in combination with the course bubble diffusers to provide aeration to all four digester tanks. It also operated the third and fourth blowers occasionally during the hot summer months to meet increased demand for aeration.

“The biggest expense for our treatment plant is electricity, followed by sludge disposal. The less amount of electricity we put into something the more money we save as long those efforts don’t make our sludge disposal rate go up,” said Bland.

When evaluating blower technologies for the project, Krebs Engineering examined a range of criteria to determine the technology best suited to the needs of the plant today, and well into the future.

Among the key considerations was the changing water levels of the digester tanks and the ability of the blowers to operate at varied discharge pressures as a result. On any given day, the water level within each digester tank typically varies from four to eighteen feet as batches of WAS are processed. The new blowers needed to readily and efficiently adapt to wide swings in discharge pressures, said Caleb Leach, PE, Senior Project Engineer, Krebs Engineering.
Blowers equipped with Variable Speed Drives (VSDs) were also clearly an important option versus fixed speed units, said Leach.

“The fixed speed PD blowers could effectively handle low, or high water levels,” Leach said. “However, they were sending the same amount of air whether it was needed or not, which of course, wasn’t as energy efficient as it could be with VFD blowers since the plant can speed them up or down based on water levels and the thickness of the sludge. We also wanted to avoid blowers that enter a surge condition and blow off excess air.”

Krebs Engineering evaluated blower technologies based on capital costs and performed a 20-year-present-worth analysis, which accounts for routine maintenance, as well as costs associated with overhauls if and when needed, and the cost to increase blower capacity to meet future processing needs. The evaluation also included a wire-to-air analysis of various blower technologies based on the total electric power consumption required to produce a specified flow and pressure.

Leach also factored in the Madison Utilities’ approach to wastewater management, noting its willingness to adopt advanced technologies to achieve efficiencies, whether it’s peracetic acid for disinfection or newer blower technologies for aeration.

The IM-30 blowers, which incorporate a proven gearbox and non-contact oil film bearings to reliably operate at speeds of 31,000 to 38,000 rpm, were engineered and packaged as two stacked configurations and installed adjacent to the digesters. Each package features two separate blowers stacked vertically in a single weatherproof enclosure. One stack of blowers is engineered with two 100-hp blowers, each of which is rated to deliver 575 to 1,750 scfm. The second stack features one 100-hp blower rated to deliver 575 to 1,750 scfm and a second 50-hp blower rated to provide 500 to 900 scfm. Combined, the blowers are designed to deliver 500 to 6,150 scfm at discharge pressures from 3.0 to 8.9 psig. 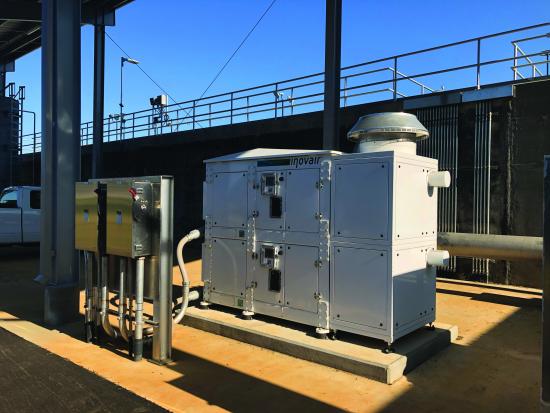 The installation of the four smaller, high-speed blowers – in place of five larger PD blowers – satisfies the need for cost-effective aeration under all load conditions, as well as increased processing needs for years to come. They also provide the standby capacity in keeping with federal regulations, but no more than necessary.

During average daily conditions, the plant typically operates one, 100-hp blower continuously at near capacity to provide the appropriate level of airflow needed for all six digesters. During low load conditions, however, it can turn off the 100-hp blower and operate the 50-hp unit to satisfy aeration needs.

The plant’s SCADA system automatically controls the blowers based on airflow needed as determined by digester load conditions and DO levels. The use of VSD blowers in place of fixed-speed units is particularly advantageous, Bland said.

“For example, the SCADA system monitors DO levels and when it sees they’re high, it will tell the blower to slow down since it’s basically burning energy for no reason,” he said.

Bland said he also appreciates the 12:1 turndown ratio of all four blowers combined since the blower system offers a high level of flexibility to provide minimal airflow during the lowest demand times without over-aerating and wasting energy, while at the same time, satisfying the need for maximum aeration when required.

“The turndown capability of the blowers is very important to me since it means we don’t have to worry about over-aerating. Why would I put more energy into it to accomplish the same job? Using technology to save energy costs is something we work to achieve in every area of the plant.”

While the blowers contribute to energy efficiency on daily basis, Bland said another advantage of the fully enclosed, stacked configuration was the ability to install the machines in a single compact footprint without the need for additional infrastructure costs normally associated with larger blowers located in a traditional blower room. Additionally, he said the plant only needs to update the impeller of the 50-hp blower to significantly increase blower aeration capacity when needed later.

“We don’t want to be wasteful,” Bland said. “I really like having the flexibility built into the system so I can upgrade to the 50-hp blower to a 100-hp blower without adding a lot of cost or having to undergo a costly shutdown.”

“I like to tell people, ‘We dropped one complete blower, reduced overall connected blower horsepower, and yet we’ve increased our aerobic digestion capacity.’ I think that says a lot about our current setup,” he said.

The new aeration blowers have met the treatment plant’s expectations for overall performance since their first day of operation. This year, Bland expects to see positive financial results based on a full analysis of cost savings. Based on results to date, he expects the plant to save approximately $50,000 or more per year in energy costs.

When viewing the big picture, Bland said he’s proud of his team’s willingness to continue to adapt to changes in technology and wastewater treatment operating strategies.

“Things are always changing,” Bland said. “Doing things the way there always done is not always acceptable. If we’re good stewards of the money we’re granted to operate the plant and we invest in the right technologies and do things efficiently and effectively the ratepayers benefit.”

All photos courtesy of Madison Utilities.