Sulzer engineers helped a plant in the Netherlands cut its energy costs with a turnkey project. Sulzer's HST turbocompressors were specifically designed for the water industry's need for high volume, low pressure air to feed aeration tanks. Four of the company's first-generation HST 2500 machines have been doing that job for almost two decades at the Deventer wastewater treatment plant in the Netherlands. Now the plant's owners have worked with Sulzer engineers to upgrade its existing units with three latest generation machines. 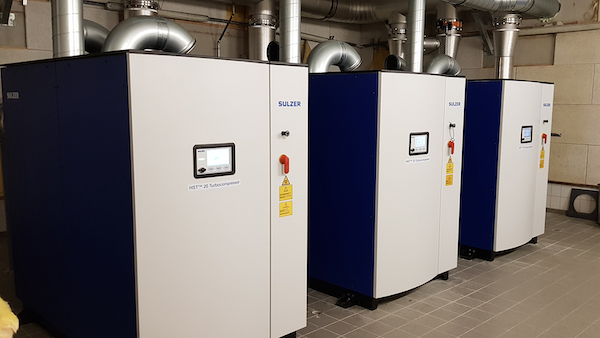 In 2001, the Deventer wastewater treatment plant in Overijssel, Netherlands, was the first in the country to install HST turbocompressors, using four 83 kW HST 2500 machines to run its large-scale aeration and denitrification systems. In 2018, the plant's owners asked Sulzer to make proposals for refurbishment of the installation to make use of the latest developments in compressor technology.

Working with the plant team, Sulzer specialists investigated several possible options, including overhauling the existing machines and upgrading them with new control electronics. Their calculations suggested, however, that replacing the existing compressors with three new generation HST 20 machines would result in energy efficiency improvements of around seven percent, a saving that would more than compensate for cost of the new machines. Under its circular economy principles, Sulzer would also buy back, refurbish, and resell the original machines, keeping waste to a minimum.

The compressor replacement was delivered by Sulzer as a turnkey project, with the company's engineers carrying out the design, installation, commissioning and testing of the compressors, pipework, and control systems. As well as reducing the number of compressors on the site from four to three, the new pipework allowed the air inlet for the system to be moved from the roof of the building – where it had suffered from water ingress – to a filter box assembly outside at ground level. Cooling air for the compressor motors is drawn from the same inlet source, then vented into the plant room in winter and outside during the summer months.

Rated at 150 kW, the new HST 20 compressors are around twice as powerful as the units they replace. Lucas Vrijdag, Product Manager, Benelux for Sulzer, said "Our team configured the system so that in normal operating conditions the compressors run at approximately 50% of their top speed, the point of maximum efficiency. Rather than keeping one compressor as a standby unit, all three act as duty machines. If any maintenance is required on a unit, the other two have sufficient capacity to run the process."

At the heart of the new process control system are six high capacity valves which precisely control the air flow rate into the plant's aeration tanks. The system relies on accurate flow measurement, an important consideration for the Sulzer team responsible for the pipework design. To achieve this, long straight lengths of pipe run upstream of the valves to ensure the airflow passing through the flowmeters is stable, thereby improving accuracy.

The PLC, controlling the compressors, continually monitors pressure in the header pipe feeding the control valves, then instructs the units to adjust their speed to maintain optimum pressure in the system as demand changes. The control systems are fully integrated with the plant's existing SCADA system.

In any upgrade project involving critical infrastructure, speed is of the essence. The Deventer plant brought in temporary, hired compressors to keep its systems running while the Sulzer team managed the removal of the original compressors and the installation and commissioning of the new units. The whole process was completed on schedule in just over three weeks, and the new system performed as required from the point of handover to the customer.

The HST 20 compressors have now been in continuous operation at the plant for more than a year. In that time, they have reduced energy consumption by 200'000 kWh saving more than EUR 20'000 per year. "Our previous HST turbocompressors have served us smoothly for over 17 years. We have no doubt the new HST 20's will perform as well, but with even lower energy costs. Sulzer did a great job in supporting us during the preliminary phase, at the construction works and with aftercare," said Jim Cramer, Specialist Mechanical Engineering at Water Board Drents Overijsselse Delta.

Sulzer is a global leader in fluid engineering. We specialize in pumping, agitation, mixing, separation, and application technologies for fluids of all types. Our customers benefit from our commitment to innovation, performance, and quality and from our responsive network of 180 world-class production facilities and service centers across the globe. Sulzer has been headquartered in Winterthur, Switzerland, since 1834. In 2019, our 16’500 employees delivered revenues of CHF 3.7 billion. Our shares are traded on the SIX Swiss Exchange. For more information, visit mwww.sulzer.com.