Until the middle of last year, aging blowers were a constant headache for the operations team at the Linz-Asten sewage treatment works. The site's integrally geared, single stage centrifugal blowers were temperamental and failure-prone, with absorbing around EUR 40,000 a year in maintenance costs. The twenty year old blowers were noisy too; so loud that you could not work in this area without strong hearing protection and it was a very heavy burden for the maintenance staff. Upgrading to Sulzer turbocompressor technology has addressed both issues at a stroke while also helping the plant to reduce its energy costs and carbon footprint. 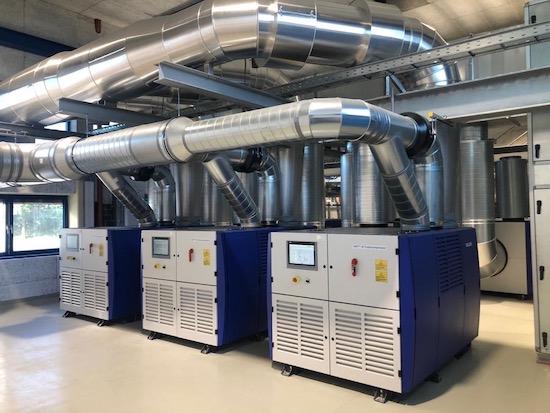 Since the new installation, energy consumption is on track to fall by 6,200 kWh per day.

The largest wastewater treatment facility in Upper Austria, the Linz-Asten sewage treatment works serves a population equivalent of 950,000. The 900 square kilometer catchment area contains the regional capital Linz, 39 neighboring municipalities and a number of Austria's major industrial companies. The search for a solution for new compressor had been ongoing for some time, but plans accelerated when the plant's operations teams heard positive reports on the performance of Sulzer's HST™ turbocompressors recently installed 130 km away at Salzburg's main wastewater treatment facility. The HST technology is designed for exceptionally high reliability in demanding process applications. HST turbocompressors have few moving parts and, thanks to magnetic bearings, are not subject to mechanical wear. That dramatically reduces routine maintenance requirements compared to older compressor technologies.

After a competitive tender process, the contract to replace the blowers was awarded to Sulzer. To allow operation of the plant to continue uninterrupted during the upgrade process, the new Sulzer's HST40 compressors were installed in a purpose-built above-ground, single story compressor house. This approach was made possible by the very low operating noise of the Sulzer compressors, which produce only 70 dB(A), compared to the 100 dB(A) generated by the old units. The new blower house and pipework were designed to accommodate six HST40 units, with four installed during the initial phase of the project, to be operated in parallel with two of the existing blowers. That approach was chosen to enable a smooth transition to HST technology. To accommodate for the old blowers, which were slower to reach full speed, some smart adaptations to the control systems were made to ensure that they would operate in sync with the fast-starting HST turbo compressors.

The installation proceeded according to schedule and the four HST compressors were brought into operation with the changeover from the old blowers taking just 10 hours. Following on from this, the two final turbo compressors have also been installed and commissioned. Since their installation, the new HST compressors have been quietly and effectively performing their role. For the Linz-Asten maintenance team, that's exactly what they wanted. With no temperamental blowers to look after, they can focus their efforts on performance, efficiency and reliability improvements elsewhere on the site. The greater energy efficiency of the HST units has had a significant impact on energy costs. Energy consumption at the site is on track to fall by more than 6,200 kWh per day. Combined with the maintenance cost reductions, that should save the facility around EUR 175,000 per year, while reducing annual carbon emissions by more than 580 tons.

About Sulzer
Sulzer is a global leader in fluid engineering. We specialize in pumping, agitation, mixing, separation and application technologies for fluids of all types. Our customers benefit from our commitment to innovation, performance and quality and from our responsive network of 180 world-class production facilities and service centers across the globe. Sulzer has been headquartered in Winterthur, Switzerland, since 1834. In 2020, our 15,000 employees delivered revenues of CHF 3.3 billion. The Pumps Equipment division specializes in pumping solutions specifically engineered for the processes of our customers. We provide pumps, agitators, compressors, grinders and screens developed through intensive research and development in fluid dynamics and advanced materials. We are a market leader in pumping solutions for water, oil and gas, power, chemicals and most industrial segments. For more information, visit www.sulzer.com.