With the economy still challenging and competitive pressures continuing to rise, reducing expenses is imperative for food processing and other manufacturing businesses. Yet many underestimate or neglect a key source of savings: the electricity bill.

You may be wise to watching the demand meter or shifting heavy loads to off-peak hours, but those are not your only options. With advanced energy management technology, you can automate control of energy from refrigeration compressors, pumps, and other equipment so that your facility runs at optimal efficiency, you pay the lowest possible rates, and you can participate in incentive programs that pay you for unused kilowatts.

Even the most energy-intensive plants can cut energy costs without compromising production or quality. The key is to take full advantage of the load-shedding strategies that an advanced energy management system enables: demand control, demand response, dynamic pricing optimization, and energy efficiency.

Demand control: Demand control (DC) is a strategy that allows food processors and other manufacturers to use energy more efficiently by managing peaks and valleys of energy demand. An advanced energy management system (EMS) allows you to do this safely by strategically directing demand reductions through a collection of selected compressor and other loads to achieve the desired kW reduction while maintaining productivity. Actions the system might take include:

The savings can be significant: peak-time energy use can account for as much as 40 percent of an industrial user’s electricity bill; avoiding these spikes can reduce the overall bill by as much as 15 percent. 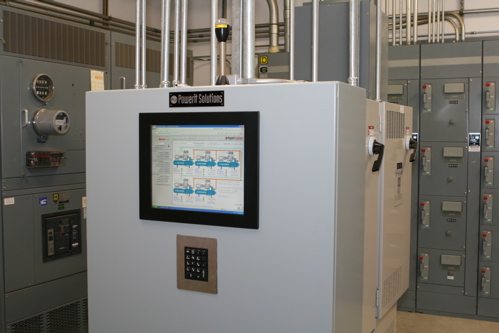 Panel view of the Spara EMS in the main electrical control room at Four Star Fruit.

Full facility monitoring and control is available from this panel, or via any network-connected computer with appropriate permissions.

Food processors often wonder how it’s possible to do this without losing production capacity. The answer is that an advanced EMS can adjust loads quickly and precisely throughout the facility (not just on, say, refrigeration equipment), so you get maximum savings with minimum disruption. An advanced system can prioritize loads sequentially, by group, or by other factors, and it can synchronize load shedding to achieve both savings and productivity targets. This level of control and precision is impossible for most facilities to achieve manually or with disparate automation systems.

For example, at Mission Produce in Oxnard, California, Powerit’s Spara system rapidly tracks dynamic operating conditions and adjusts power loads, sometimes for just minutes. The system controls evaporator and condenser fans via variable frequency drives (VFDs), five refrigeration compressors in two locations, and battery chargers. Since system implementation, the company has reduced its peak-load energy use and monthly energy bills by about one-third. The company has set rules in the system to protect production—the EMS never takes curtailment actions beyond the levels specified.

Demand response: This is a demand reduction strategy being implemented by utilities and power system operators across the country. Demand response (DR) programs let you earn money by curtailing your electricity use on demand. For example, on an unusually hot summer day a utility might notify demand response participants that it needs them to curtail their usage by an amount specified in their participation contract. 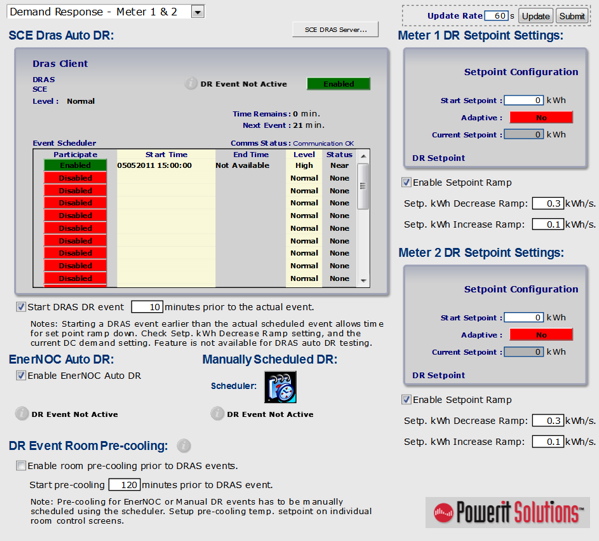 SparaView is connected to the aggregator’s Auto DR server and SCE’s demand response automation server. Four Star’s Spara EMS implementation is configured to automatically pre-cool grape storage rooms before the DR event, and Spara has the process knowledge to protect products during the event.

There are two types of DR programs: In standby/reliability programs, you commit to specific load reductions when the grid is under stress. These infrequent events often last two to four hours. Prices are usually $30,000 to $60,000 per MW. In reserves/market-based programs, you agree to cut usage based on a set price. Events are more frequent than standby/reliability events and usually last one hour or less. Prices are typically about $40,000 per MW.

Automated demand response (Auto-DR) programs tend to be the most lucrative programs. Advanced technology is essential for participation, however: new and upcoming programs require automated communications between user and supplier systems, along with quicker, more significant responses. In these programs, a business’s system and the utility or grid operator’s system “talk” with each other using the OpenADR (automated demand response) standard. A Smart DRAS (demand response automation server) client provides a dynamic connection. For example, with Powerit’s Spara EMS, the supplier’s system notifies the user’s system of a demand response event, and Spara takes action according to energy usage rules set for that facility. Users can also set multiple electricity pricing levels where they want to respond with predefined actions.

Even with non-automated DR programs, though, many food processors find participation impossible without an advanced EMS. Mission Produce tried it, but found that manually shutting down system components took too long to be effective and the staff lacked the ability to fine-tune the entire system for ramp-up. It’s now able to earn incentive payments through Southern California Edison’s program.

Dynamic pricing optimization: Many utilities employ dynamic pricing strategies, such as real-time pricing (RTP), that involve rate changes based on the market price of electricity, weather events, or other conditions. These changes can happen with anywhere from just minutes’ to 24 hours’ notice, and in worst-case examples, power costs have jumped during an RTP spike to more than 100 times the normal rate. An advanced EMS lets you respond automatically to ongoing price fluctuations by shifting consumption to lower rate periods or reducing consumption during costly super-peak times.

Only a small fraction of food processing businesses takes advantage of these prime saving opportunities, but the few that do demonstrate the potential. For example, Four Star Fruit of Delano, California, uses Powerit Solutions’ Spara EMS to implement demand control, Auto-DR, and energy efficiency measures that combined save the company 16% annually on its electricity bill.

Four Star uses a very large amount of electricity during three critical months of the year, and its business is growing. In the 36 months preceding the implementation of its energy management system, the business grew in the double digits while its power consumption doubled. The company wanted to better control its energy use, in light of a predicted rise in power prices over the next several years, and to improve its “green” credentials.

Facilities like Four Star’s offer good potential for both DR and DC strategies: the facility can precool and flywheel cool in anticipation of a DR event, or use temperature buffers to ride out a DC event. In this case:

The type of facility (precooling combined with long-term storage) made the company a good candidate for an Auto-DR program. Four Star’s EMS integrates with demand response automated servers (DRAS) operated by its utility, (Southern California Edison) and demand response aggregator (EnerNoc). The company participated in both DR events called by the last season, achieving a load reduction near to their test demonstration reduction of 700kW. 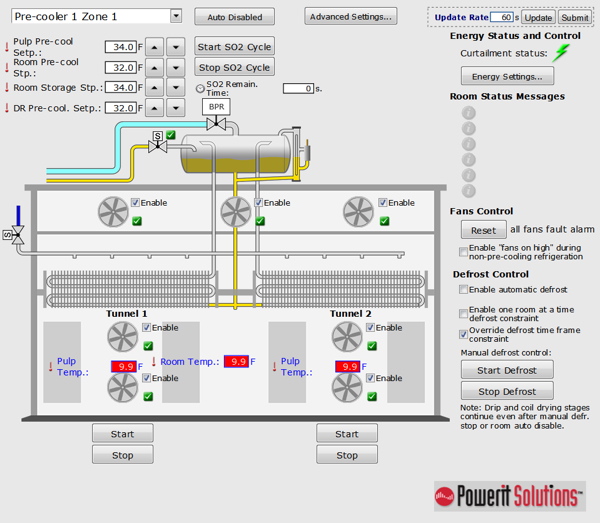 This is one of 15 rooms Spara EMS automates for demand control and demand response. Spara EMS is designed to balance DR and EE with the operational requirements of the facility. The Spara system integrates with a host of industrial processes and loads, including those in food processing facilities, to plug energy-intensive businesses into the smart grid.

So how do you determine whether your facility can realize these types of savings? A thorough assessment of your production systems is a key first step. Here’s the process my company follows when conducting assessments:

Define the savings opportunities. We do this by analyzing electric bills and historical kW interval data and evaluating opportunities to participate in demand response or other incentives programs.

Create a data picture of the facility. We collect detailed data about the facility’s main processes, largest electrical loads, and the facility in general.

Perform a site audit. The audit covers the entire facility and all processes, from receiving raw materials to final product shipping. Because the largest electrical loads provide the best ROI for automation investment, those loads are analyzed in detail. We look at current standard operating procedures, typical run time, time of use, and loads, and evaluate those areas for inefficiencies.

Savings can come from multiple initiatives. In general, if a load has a process buffer (the output of the load is stored until a maximum point is reached, then the load is turned off until the minimum point is reached), cost savings opportunities exist. The load can be turned off or slowed down when energy costs are high, for example. By studying the entire process and identifying these buffers within batch or continuous processes, we typically find opportunities for energy cost reductions via demand control, demand response, energy efficiency, or all three.

Finalize the evaluation. Based on the results of data collection and the site audit, the initial savings estimate is revised to correct any mistaken assumptions and reflect actual savings potential.

What happened here? The facility’s processes were interrupted, but they weren’t disrupted. The changes were defined in advance as acceptable power reductions in return for energy savings.

Food processors can significantly reduce previously uncontrollable energy costs. By being able to aggressively manage a monopoly-controlled resource that continues to rise in cost year over year, you can not only cut costs, but also gain competitive advantage.

Fitting the investment into tight budgets

The investment in an advanced EMS is more manageable that many facility operators expect. Depending on incentives available in your area and your implementation, it’s possible to achieve ROI anywhere from immediately to 18 months.

Many utilities offer incentive programs that cover partial or even full costs of systems designed to reduce energy consumption or manage peak demand. These incentives cover a wide variety of equipment and technology for applications ranging from basic energy efficiency to automating participation in demand response programs. Details on five incentive programs are available here

Where incentive programs aren’t available, renting, renting to own, and leasing often are attractive alternatives to outright purchases. These financing options increase purchasing power and lower the upfront investment, allowing immediate action on reducing energy costs, even when there’s no budget for new technology. Depending on the circumstances, businesses may be able to realize tax benefits through bonus and accelerated depreciation or investment tax credits, and can even realize immediate positive cash flow.

Bob Zak is general manager and president of Powerit Solutions North America, a Seattle-based international cleantech company whose Spara energy management system allows energy-intensive businesses to take full advantage of the smart grid. Zak is a member of the controls experts group working with Lawrence Berkeley National Laboratory to advance Auto-DR and other smart grid initiatives. Early in the development of OpenADR, Powerit worked closely with the Lab to put the new standard into practical use at commercial and industrial sites.