This brewery is a relatively large operation with nine production lines plus a keg line. There are five bottle lines and four can lines. Operations in the plant include palletizing de-palletizing, filling, packaging operations, and brewing.

This was a complete supply and demand-side system assessment. Although the leak audit yielded 930 cfm in demand reductions, this article will focus on some lesser-known project areas where a plant can reduce compressed air consumption.

The air system operates 8,760 hours per year. The load profile or air demand of this system is relatively stable during all shifts. Overall system flow ranges from 4,000 scfm during production to 5,000 scfm. The system pressure runs from 68 to 73 psig in the headers during production.

During our site visit, the units performed very well, spending very little, if any, time in blow-off. There are seven air compressors and usually three units carry the plant load – two are at idle and two are not running, waiting to come on in the auto hot start “ready” mode.

The compressed air goes through water-cooled after-coolers and then goes to four blower purge dryers. During our site visit, all the dryers were working well with their dewpoint demand controls engaged and working. Pressure dewpoints were always at a consisent -40°F.

The plant runs 24 hours a day, 7 days a week, almost all 365 days a year. There are two planned shutdown days every year. For calculating usage, we have agreed to use 8,760 hours per year. The new negotiated power cost from the plant’s utility provider is 6 cents per kWh.

Shutting off the air supply to machinery when not in use can often minimize some of the most significant air leaks. When such air users are found, there are usually some very economical and easy methods to switch off air automatically as machinery is shut off.

Slow-acting, electric-operated automatic ball valves that can be installed in the main feed line to a piece of equipment and wired so it will open and close whenever the machine is powered up or shut off.

The system assessment identified Filtech laser coolers as using compressed air when not in operation. The table below lists locations where automatic shut-off valves may be of use, either as individual machine shut-offs or as zone valves, in front of the laser coolers.

Current peak demand with 15 units x 20 cfm is 300 cfm at 80% usage or 240 cfm average demand. According to plant personnel, these units were running even when the line was down for cooling. If we consider a normal operation of the Packer or a device or part of the line, depending on the product being packaged (6 pack, 12 pack, case, etc.), the estimate of average usage is 30% of the Packager.

When shut off cooling air flow when process is off, the utilization factor will go from 80% to 30%. Air demand will go from an average flow of 240 cfm to an average of 90 cfm, making a net average savings of 150 cfm. We recommend a 10 minute delay after shutdown for additional cooling. This should be reviewed by staff engineering.

During our site visit, we counted somewhat over forty 4,000 Btu/hr refrigeration-type (Freon) cabinet coolers similar to the Hoffman CR2902 units. 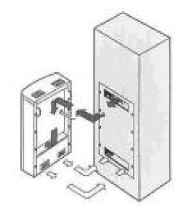 Freon based refrigeration units can lower the ambient air temperature about 15 to 16ºF each pass. For more cooling drop the refrigeration action is cumulative as long as there is enough capacity. This limits their usage to ambient temperatures no higher than about 125ºF.

The refrigeration units mount on the side of the cabinet and continue to cool the same air in the cabinet over and over until they reach the desired internal temperature. The units usually run constant speed but when there is enough refrigeration capacity these may be controlled to shut off with a temperature switch. In practice they usually run most the time because they are being controlled by the hot gas bypass valve. There is no electrical energy savings in the HGBV control model.

A heat pipe consists of a sealed aluminum or copper container whose inner surfaces have a capillary wicking material. Inside the container is a liquid (usually alcohol) under its own pressure that enters the pores of the capillary material, wetting all internal surfaces. Applying heat at any point along the surface of the heat pipe causes the liquid at that point to boil and enter a vapor state. When that happens, the gas picks up the latent heat of vaporization – the gas – which then has a higher pressure, moves inside the sealed container to a colder location where it condenses. Thus, the latent heat of vaporization moves heat from the input to the output end of the heat pipe. This process takes place at great speed, reaching over 500 MPH.

The core material selected for use in the heat tube cabinet cooler is copper tubing and aluminum fins. This combination of materials is readily available and has been in use for many decades in refrigeration coils, steam heating coils, radiators, etc.

The fans are designed to be an easily change replacement part and two axial fans are usually selected as the standard fans for heat pipe cabinet coolers.

The annual maintenance on these units would be to clean or replace the filter elements and the fans as required.

We recommend replacing these coolers with a Noren Model CC3060, Type 22 or equal heat pipe with cooling water assist. The cooling water does not enter the cabinet. The Noren CC3060 with water assist is rated to handle 9,300 Btu/hr of cooling, so it will only be 67% loaded at 4,000 Btu/year. Comparative specifications:

Compressed air vortex tube cabinet coolers behave in a very predictable and controllable way. When compressed air is released into the tube through the Vortex generator, hot air blows out of one end of the tube and cold air out of the other.

The Vortex flow generator – an interchangeable, stationary part – regulates the volume of compressed air, allowing the plant to alter the air flows and temperature ranges that can be produced with the tube on some models.

Back-pressure on the cold end will reduce the ratios across the tube and raise the cold end temperature. There is usually a relief valve in the Vortex tube cooler assembly venting the cabinet air, not allowing back pressure to build up, and exchange hot air for cold air.

Since well-applied Vortex tubes cool quickly and have no moving parts, they can shut on and off as often as required to save air flow.

Vortex tube coolers should always be controlled by a thermostat sensing the inside cabinet air and an electric solenoid to shut the air on and off with the signal.

There are twelve vortex cabinet coolers installed on the labeling lines.

All the vortex coolers were not running cool enough, probably due to low pressure and possibly dirt or a ring seal failure. None of the units have auto shut off controls. Add auto shut off to all the vortex units and raise the pressure 75 80 psi. Estimated minimum flow savings with an auto thermostat shut off with 80 psi inlet is 72 cfm.

The system assessment identified 52 vacuum generators using 215 scfm of compressed air. We estimate that 62 scfm of use can be eliminated if automatic compressed air shut-off controls are used when the generators are not functioning.

Single-stage vacuum generators use compressed air by accelerating the air through the restrictor tube to create a Venturi effect to evacuate the required volume of air. These single-stage Venturi generators are somewhat limited in their ability to fit many applications efficiently, since their basic design is set to accommodate either the highest flow or highest volume requirement. Typically, this type of vacuum generator has a ratio of compressed air consumption (scfm) to vacuum flow (the rate at which atmospheric pressure is removed from a system) of no better than 1:1 and sometimes as high as 2:1 or 3:1.

Multi-stage vacuum generators were developed to improve this efficiency for many applications. The multi-stage units use a series of ejectors and nozzles that allow compressed air to expand in controlled stages. This usually improves the ratio of compressed air consumption to vacuum flow to a level of up to 1:2 or more. Multi-stage units are also quieter. 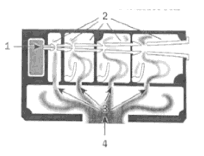 Debaggers 63 / 64 /65 are also breaking only the vacuum line, which is not on air side. Demand is 24 cfm and moving the shutoff solenoid to the air line will generate 12 cfm average of compressed air savings.

The lid debagger has two units running the same as above with only breaking the vacuum lines not on the compressed air side. These units run at 50% utilization. Demand is 40 cfm for a savings of 50%. The compressed air savings is 20 cfm.

Line 66 Jones Stacker is running vacuum at 50% utilization with the breaking vacuum only in the vacuum line not on the air side. Demand is 10 cfm and the solenoid should be moved. Air savings is 5 cfm.

Review Line 6 Targeter after the system is running.

The Line 4 Case Packer unit is also breaking vacuum instead of air side. Move solenoid. Savings is 5 cfm.

The Depalletizer area has the Lid line running continuously. Investigate this situation further since the paper is very think and auto shut-off system may not be a good fit. This system may also use a central vacuum system. These are both Phase 2 recommendations.

Most of the Packaging machines had vacuum breaks on the vacuum line and not on the compressed air side, which when shut off stops the air flow and the vacuum. In many cases, the Packers were not on during our site visit. It would be a good idea to evaluate the rest of the vacuum generators after those listed are modified.

When the vacuum capacity to product lift is appropriate, add venturi generator with built-in automatic on/off controls. For example: A vacuum generator which uses 60 scfm at 90 psig and can pull a 20” vacuum in 0.25 seconds. If the vacuum generator is shut off at 20” of mercury vacuum pressure, total air demand will be about 0.25 scfm (1/16 hp) vs. 60 scfm (15 hp). 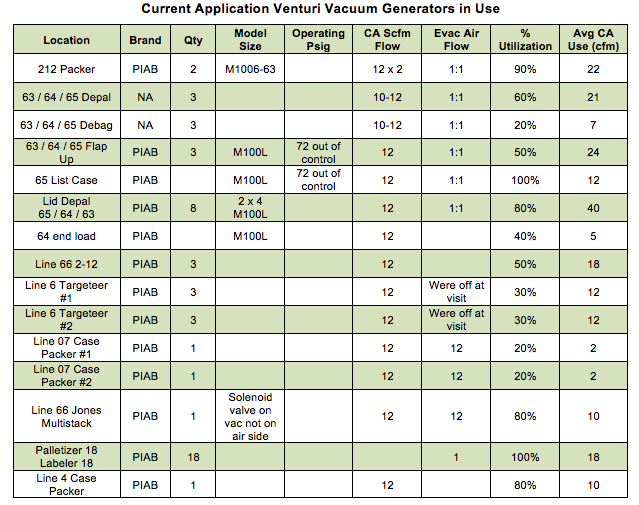 When the plant lowered its pressure on a continuing basis to the current 72 psig target, many good things happened, particularly when the plant processes received a stable operating pressure. However, in some cases, the lowered pressure apparently had a negative impact on production and quality and these pneumatic amplifiers were installed to deliver higher pressure to these locations.

Discussions with various plant operating personnel indicate that at system pressure (80 psig), none of these amplifiers would be needed. We observed the Haskall MPS pneumatic booster at the following locations 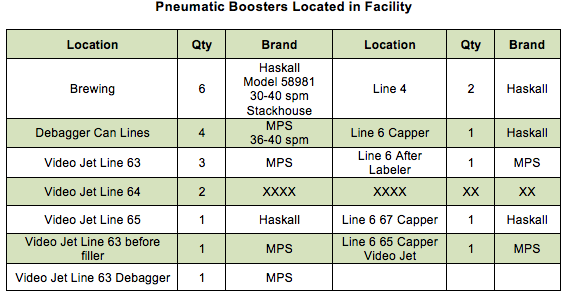 There are currently at least 24 pneumatic boosters in use throughout the plant at the locations shown in the table above. Most of these units are the 20 cfm size. This means they deliver 20 cfm at twice the intake pressure, but will require a total of 40 cfm to run.

At least half of these units are not operating at full speed, and will therefore, use somewhat less air. To estimate the impact of this project on the air system, we will use an average of 15 cfm delivered to drive the booster on 24 units (24 x 15 cfm) or 360 cfm reduction).

Since the air supply is from Centrifugal compressors lowering or raising the pressure does not have any significant impact on the input kW according to the operating performance curves. Raising the pressure enough to eliminate the pneumatic boosters will then reduce the flow somewhat but not enough to cause another unit to run.

The system assessment at this brewery realized significant demand-side reduction opportunities. Average system flow was reduced from 5,068 to 3,111 scfm. While much attention is appropriately given to compressed air leaks (they totaled 930 cfm at this job), it is important to find the other areas of inappropriate compressed air uses in the plant. 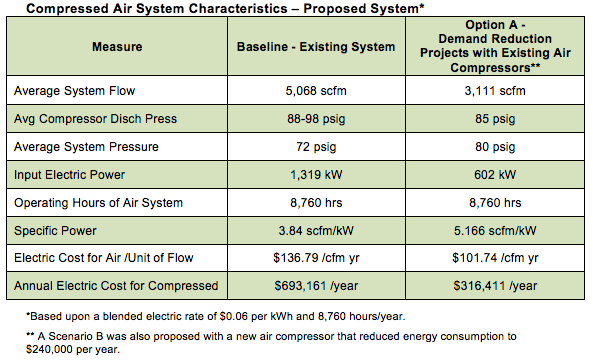