After auditing and field-testing, the Sni-A-Bar Municipal Wastewater Plant in Blue Springs, Missouri, partnered with Inovair to replace 4 fixed-speed rotary lobe blowers on its aeration system with 4 Variable Frequency Drive (VFD), integrally geared centrifugal blowers. The new blowers, along with improvements in blower controls, reduces annual energy use by 442,664 kWh and peak electrical demand by 48.76 kW, which translates to an annual energy reduction of 37 percent and anticipated savings of $42,000 per year. Additionally, a rebate of $45,799 from the local utility resulted in a payback of less than six years.

The Sni-A-Bar Municipal Wastewater Treatment Plant serves the cities of Blue Springs and Grain Valley, Missouri, in the greater Kansas City area. In 2013 the plant underwent an expansion to increase average design capacity to 10 million gallons per day (MGD) with peak capability of 36 MGD. Additionally, it improved discharged effluent quality to comply with increasingly stringent environmental requirements. The expansion involved construction of two aeration basins with fine-bubble diffusers. The basins were also equipped with five 150 horsepower (hp) rotary lobe aeration blower packages with two blowers per basin and a single redundant blower for serving either basin.

The aeration basins operate in parallel with a nitrification/de-nitrification cycle, aerated for five hours and un-aerated for one hour. During the aeration cycle for each basin, a lead blower is brought online and runs continuously, and after 10 minutes of aeration, the lag blower is cycled on and off based on Dissolved Oxygen level (DO) readings. Specifically, it is turned on when DO drops below 1 ppm and off when DO rises above 2 ppm. A typical aeration cycle has the lag blower running for two to three hours in a five-hour period.

While the expansion left the plant with a much-improved effluent quality and increased capacity, the electrical cost associated the aeration blowers was significant. It is commonly known that aeration blowers generally consume half or more of a plant’s electrical energy, accounting for more than a quarter of its total operating budget.

Since the aeration basins already had fine-bubble diffusers for state-of-the-art oxygen transfer efficiency, the plant set its sites on aeration blowers for the next area of efficiency gains. Additionally, with the DO logic cycling each lag blower six to 10 times in a six-hour period, the high quantity of blower starts was causing undue wear on the belt drive systems and turning into a maintenance headache, despite electronic soft-starters on each motor.

As a first step, the Inovair team performed an audit of the blowers and aeration system to determine the suitability of its new IM blowers for the Sni-A-Bar plant. A second step involved a field trial to demonstrate the actual in-field savings between the existing blowers and the IM blowers.

Measurements indicated that each rotary lobe blower consumed 99.8 kW of electrical input power to deliver 1,875 scfm at 9.5 psig line pressure. By comparison, testing of Inovair’s prototype IM blower at the company’s aerodynamic test cell showed the blower could deliver 1,875 scfm under the same conditions while only consuming 75.2 kW of electrical power, representing a 25 percent savings. Additionally, under worst-case design with ambient conditions of 100 oF, testing showed the Inovair IM blower could deliver design flow of 1,875 scfm within the limits of a 100 hp motor.

Following the audit, the team planned a field demonstration of its prototype IM blower at the plant. It would be ideal to instrument and compare each blower’s wire to air performance continuously, but that wasn’t realistic with an operational plant. Instead, given the parallel operation of the plant’s two aeration basins, Basin 2 would be aerated exclusively by a pair of 100 hp Inovair IM units, while Basin 3 would remain unchanged and the electrical power going to each set of blowers would be monitored and compared over the testing duration. While it is difficult to compare any two aeration cycles as they are offset by three hours and the product inflow varies throughout the day over a sufficient number of cycles, it is reasonable to assume the average aeration requirement of each basin is the same.

IM units feature a unique design that allows two modules to be stacked in a single unit. As such, the plant only needed to remove a single 150 hp blower to install both 100 hp Inovair units. Four original blowers remained in place during the trial and the plant was able to maintain operations uninterrupted throughout installation. 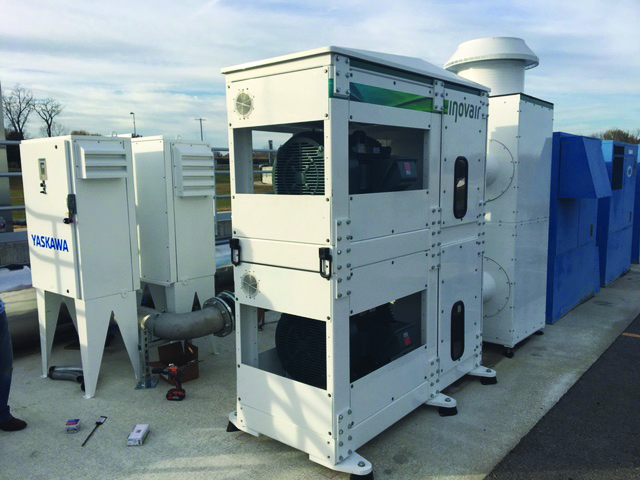 Figure 1. Shown is the Inovair IM prototype during installation. The customer-specified Variable Frequency Drives are visible in the background.

“There was no more electrical work needed than making sure it met the NEC guidelines,” said Jesse Cox, of Superior Electrical Contractors (SEC) who handled the electrical portion of the installation.

Table 1: Energy savings results only reflect efficiency improvement since no significant process changes were made during the trial period.

The trial demonstrated the opportunity to save nearly $40,000 per year on electric costs. In addition, it qualified the project for a rebate of $45,799 from Kansas City Power and Light’s Business Energy Efficiency Rebate program. The rebate offset the cost of replacing the plant’s four rotary lobe blowers with Inovair IM units.

Blue Springs decided to purchase four 100 hp Inovair IM blower units, arranged in 2 stacks of 2 units each. The plan called for Basin 2 to remain aerated by the prototype IM stack.  Basin 3 was scheduled for a production IM stack in late spring of 2018. Given IM’s configuration and compact footprint, the plant only needed to remove two existing blowers, maintaining three blowers as standby units with one blower dedicated to each basin and a swing blower that could serve either one.

A benefit of head-to-head field-testing is the simplicity of analysis since the basins can be observed receiving essentially the same product flow. DO levels can also be monitored in each basin and maintained within limits. Additionally, power monitors can be used to log total energy consumed by each set of blowers, eliminating the need for corrections to see the savings. However, digging into the data and design a little more, one large difference between the two basins is that the master controls on the IM blowers can control their flow output based on DO or other process feedback.

During the field trial, the IM blowers were set to run the lead blower at full capacity for 10 minutes, then bring the lag blower online and modulate flow of both blowers to maintain DO at the 2.0 parts per million (ppm) setpoint, while the original rotary lobe blowers cycle back and forth between 1 ppm and 2 ppm for an average DO level near 1.5 ppm. Thus the 26 percent energy savings was achieved with the new blowers maintaining a 2.0 ppm average DO level in Basin 2, while the rotary lobe blowers were maintaining approximately 1.5 ppm DO level in Basin 3.

By early 2018 Inovair had made some refinements to the DO control algorithm to improve airflow swings in DO and plant operators had sufficient confidence and experience with the blower’s DO control scheme to begin turning DO setpoint down from 2 ppm to 1.5 ppm, more closely matching the average DO level achieved with the on-off cycling of the rotary lobe blowers.

Figure 2. Shown are typical DO levels after refinement of the new blowers’ DO feedback system and a reduction in setpoint to 1.5 ppm. Average DO levels were 1.49 ppm in Basin 2 and 1.18 ppm in Basin 3.

Bringing the target DO level down reduced the needed airflow. The two basin’s aeration blowers were power-logged for over 600 hours during a one-month period as shown in Figure 3. Total savings increased to 37 percent with the additional 11 percentage points in savings due to process improvement available from the variable airflow capability of the IM blowers.

“At this time we are conservatively estimating a savings of $3,500 per month, or $42,000 annually. We also achieved cost savings for maintenance, which we estimate to be $2,500 annually,” said Jeff Mock, Operations Manager for Blue Springs.

In May of 2018, the team installed the IM stack on Basin 3. A comparison between the unit on Basin 3 and the prototype IM unit on Basin 2 showed an additional savings of approximately 10 percent. The additional savings are due to the blower on Basin 3 having a slightly increased flow capacity, resulting in greater efficiency at high flow, but slightly reduced turndown. This is in addition to improvements to the DO feedback control logic for an overall better match to this particular system. 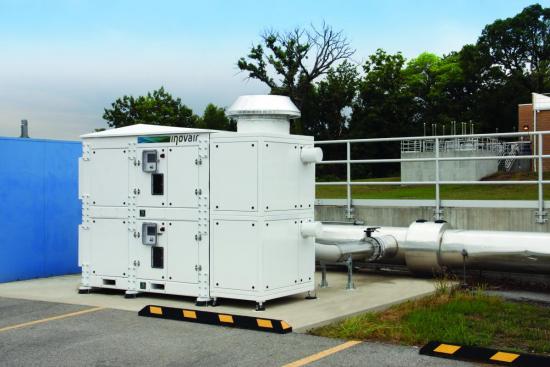 The IM unit on Basin 3 offers a more compact footprint and increased weather resistance compared to the prototype IM blower on Basin 2. Plant operators appreciate the sound level of less than 82 dBA.

“I was very impressed with the efficiency of these units. The Inovair blowers provided more airflow with reduced kW consumption and maintained a more consistent DO level, ” said Cox, who has a long history of supporting Blue Springs’ electrical contracting needs.

Summarizing the project, Mock said, “Following a side by side evaluation comparing the energy consumption between the IM blowers and the positive displacement blowers, the Inovair blowers exceeded the anticipated energy savings. Along with the energy efficiency we believe the operation and maintenance costs of the equipment will also result in additional savings. The entire Inovair team was extremely informative and helpful in bringing this project together. Their customer service prior to, during, and after the project was excellent.”