Bottling companies and breweries, in California, are benefiting from a three-step system assessment process aimed at reducing the electrical consumption of their compressed air systems. The three-step process reduces compressed air demand in bottling lines by focusing on open blowing and idle equipment, and then improves the specic power (reducing the energy consumption) of the air compressors.

Bottling companies require 2-3 PSI “open-blowing air” for many applications including, but not limited to, bottle drying for sleeve, paper or pressure sensitive labeling, crown and safety seal drying, warmer and pasteurizer discharge blow-off, combiner gap prevention, ionized air rinsing, drying prior to ink jet coding and shrink or cardboard packing of: cans, jars, PET and glass bottles, kegs & barrels, crates & pallets, boxed drinks, and pouches. Due to convenience of installation, many bottling facilities use compressed air, even though it’s produced expensively at 50 times the required pressure (typically 100 psi), for these low-pressure open-blowing applications. 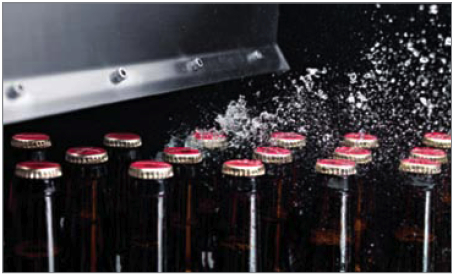 Although only needing 2-3 PSI of pressure at the site of the gap transfer, 100 PSI compressed air was used — a full 50 times higher than the required pressure. The air flow measured at each of the two nozzles was 50 CFM. Assuming the industry “rule-of thumb” of 4 CFM per kW, the application was requiring 22.7 hp (18kW) of energy generation. With an operating schedule of 3000 hours per year, total energy usage was estimated at 53,430 kWh costing $4,530 a year.

The solution was a high-speed motor, centrifugal blower, Variable Frequency Drive (VFD), and four custom adjustable-mount nozzles. The centrifugal blowers direct-drive technology enabled adjustable operation speeds of up to 20,000 RPM, creating adjustable flow rates of up to 750 CFM at pressures of 2.3 PSI. The compact footprint of the motor and blower enabled it to be located within feet of the application via 3" diameter (75 mm) hoses to the adjustable nozzles. The nozzles were then mounted at each corner of the guide rails (bottom/top-left, bottom-top-right) at the beginning of the gap. The custom mounting application and nozzles provided the soft drink bottling manufacturer adjustable air directional ow, while the VFD provided air flow and pressure adjustability. 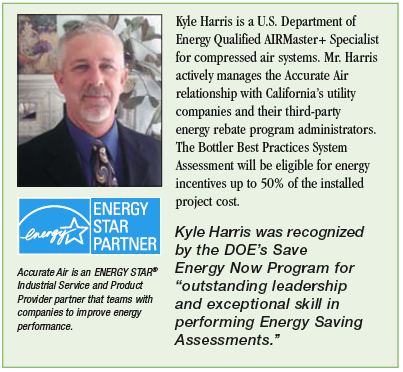 The custom blower solution consumed only 3 Hp (2.2 kW) representing an energy reduction of 20 HP, or an 87% true energy consumption savings. Based upon the soft drink manufacturer’s production cycle and kWh rate, annual energy costs were estimated at only $970 per year resulting in a total annual savings of $3,560. This drastically reduced the soft drink bottling manufacturer’s annual energy costs by 80%. These energy cost savings offered an estimated 65% return on the investment in the rst year, and 125% ROI in two years. As an added bonus, the new blower system eliminated the high-pitched operational noise emitted by the old gap transfer system. 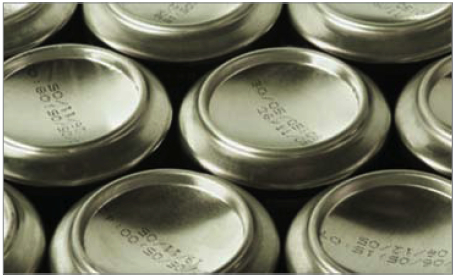 In order to estimate the total amount of compressed air wasted each year at this facility, conservative figures were used to calculate the total amount of hours where production lines were not in use. It was assumed that each production line is down for a total of one hour during the daily hours of 0600 to 0200. During the early-dawn hours of 0200 to 0600 it was estimated that one production line was operating and three were down. The savings potential was estimated at 166,317 kWh or $20,000 per year.

The electrically-operated (normally closed) air shut-off valves were wired into the on/off switch of each piece of bottling equipment. If the equipment had a separate run switch, wiring the normally closed air shut-off valve into the run circuit had the added advantage of shutting off the compressed air during breaks and lunches. A second discovery from the system assessment was that all parts of the bottling process did not need air simultaneously. Solenoid valves were used to shut off the air supply when not required. Implementation costs were $10,000 providing a simple ROI of 6 months. 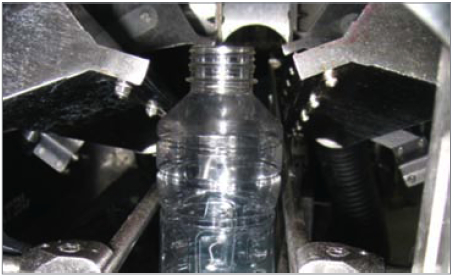 Once a system analysis has investigated all the ways to reduce compressed air demand and pressure in the facility, the system assessment turns it's attention to making sure that the air compressors are operating in the most efcient manner possible. The idea is to get the maximum volume of air flow (measured in cfm) for every kW consumed of power. This is called optimizing the specific power of the air compressors.

A system assessment, at a bottling facility in Southern California, revealed that the existing compressed air system did not optimally match compressor output to system demand. In multiple compressor installations, without automation, there is a high likelihood that the compressors will be partially loaded.
The problem with this is that none of the compressors will operate at their maximum efciency levels. It is always more efcient to operate one air compressor at full load versus operating two or three air compressors at partial load. The CFM/kW value for this system was 23 kW per 100 CFM. Well-designed systems can be expected to have an average specic power lower than 18 kW per 100 CFM. 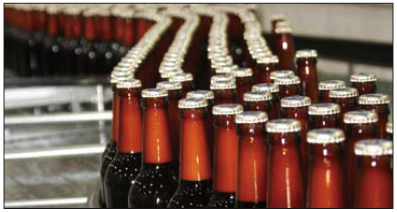 The storage capacity of the compressed air system was estimated to be 145 cf/bar or 10 cf/psig. This capacity was in multiple small air receivers totaling 760 gallons, over 500 feet of 3" pipe and over 900 feet of 2" pipe. This means that if the plant were to lose a 100 hp air compressor and assuming it was fully loaded, the plant pressure would drop 24 psig in less than 30 seconds. 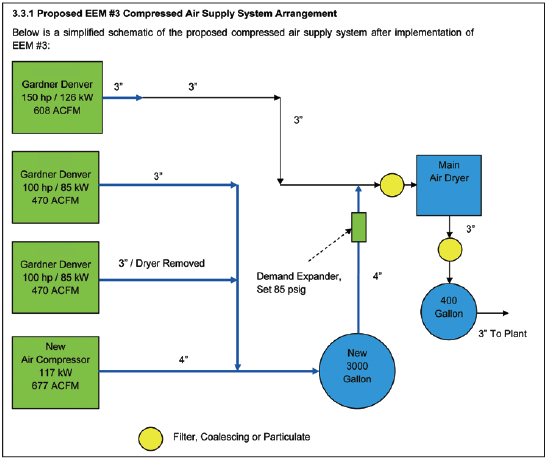