SupremeX, a Canadian based envelope and packaging manufacturer, with 11 facilities across six provinces, as well as five facilities in the United States, recently upgraded the vacuum system in their Winnipeg based plant.  This article discusses the system before and after the changes, and the significant energy savings, plus improved system reliability that resulted. The company also captured a significant utility incentive to help with the cost of a new cutting-edge variable speed vacuum pump.

The Winnipeg facility has multiple production machines that use both compressed air and vacuum energy to produce various styles of envelopes . The vacuum within the machines is mainly used to provide hold down force along the production line, while folding, forming, and printing the product.

The facility had four lubricated screw vacuum pumps sized at 75 hp and rated at about 1,000 acfm to provide the required vacuum, with the desired target vacuum level of 20 inches Hg. These pumps were all independently controlled with manual start. The production machine operators were trained to start an additional pump, if available, anytime the vacuum level dropped below about 18 inches and to turn off pumps when production levels decreased, and vacuum levels naturally increased.

The vacuum and compressed air systems are located in an isolated corner of the plant away from the production floor. This was done for practical reasons, the pumps produced a high level of noise and a great deal of heat. This had negative consequences, especially on the compressed air system, because the compressors and pumps are air-cooled and subject to overheating in warm summer months due to a temperature build up.

A few years ago, data loggers were placed to see how the vacuum system was performing. Data loggers were placed to monitor system power consumption, and to determine how the vacuum levels responded to the varying plant production demands. This was done because the plant management and machine adjusters were not totally happy with the way the system pressure was controlled. Figure 1 shows the result, it can be seen there was a very wide variation in the vacuum level throughput the operating cycle. Sometimes there were not enough vacuum pumps running to support the pressure, causing difficulties within the production machines, and requiring quick action by adjusters to start another  pump. Then, when the high demand reduced, vacuum levels would rise to levels far higher than required until adjusters remembered to turn the extra pumps off. 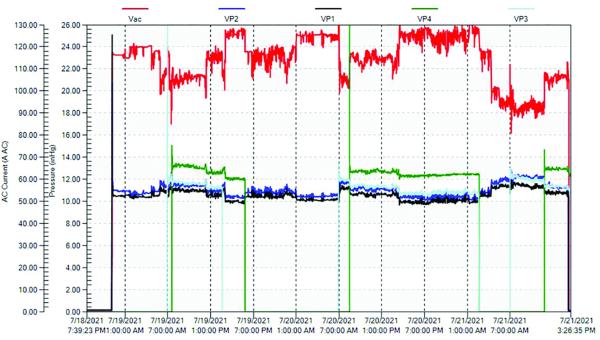 One of the characteristics of positive displacement vacuum pumps is that the scfm flow out of the pump varies with vacuum level. This means at each vacuum level, the pump capacity changes, as the vacuum level rises any particular pump will get less and less effective in passing flow. The relationship is as follows:

Where:
Pabs is the vacuum level in absolute units, in this case inches Hg
Patm is the absolute atmospheric pressure at site
icfm is the rating of the pump
scfm is the effective amount of standard air voume the pump will pass

The trouble with fixed speed vacuum pumps is that this reduction in effective scfm flow at various levels of vacuum comes with very little reduction in power.  Therefore, once a vacuum pump is turned on, it starts costing its full amount, whether or not you are using its full flow capability.  In fact, what happens is the system vacuum level will rise to a point where the effective flow of the pumps equals that of the production demand, all based on this relationship.

“We knew the SupremeX vacuum system had always been poorly controlled and costly”, said Pat Kerr, District Manager at CFM Air Equipment, the service company responsible for maintaining the vacuum and compressed air systems, “Until the recent introduction of compatible variable speed vacuum pumps there wasn’t much of an alternative to choose from. But we were finally able to offer some very efficient options that solved a number of problems and saved energy”.

SupremeX was no stranger to variable speed drive technology, a few years before their compressed air system was upgraded by adding a main VSD compressor, large storage tank, cycling air dryer, and pressure/flow controllers, all additions well supported by the local power utility. Based on the data captured by the previous system measurement, and the characteristics of a new more efficient 100 hp VSD controlled vacuum pump, the utility once again was prepared to grant a substantial incentive to help renew the system in an energy efficient way.

Variable speed vacuum pumps save energy because they keep the vacuum at constant levels and control the outlet flow by increasing or decreasing the pump drive rpm. When controlled in this way the pump reduces its output in proportion to the flow demand, rather than consuming a flat consumption like fixed speed devices. Figure 3 shows the SupremeX vacuum and power profile with a new 100 hp VSD pump operating with one 75 hp fixed speed unit turned on as required. Notice the much more constant vacuum level, this takes away a variable that might plague production activities.

Data loggers were again placed on the system after two of the 75 hp fixed speed pumps were removed. The data showed that average power consumption fell to about 65 kW (a 35% reduction). Tests showed that each old 75 hp vacuum pump was equivalent in flow to about 35% of the new 100 hp VSD pump at 20“ Hg.

The final verification readings showed some interesting things when it came to non-productive flows during a short half day Saturday shift.  Readings showed that with only two small production machines running the plant was consuming about 50% of the capacity of the VSD pump.  A subsequent plant inspection showed that there were a number of leaky isolation valves on production machines contributing to the flow. These were identified for repair.

One very useful characteristic of VSD controlled pumps is that plant vacuum leakage can be assessed by simply looking at the pump rpm during low load times. Taking the low flow rpm and dividing by the full load rpm shows you what fraction of the pump is being used to feed leaks. Figure 4 shows an example of one time periods were leakage tests were done. The chart also shows a comparison of the power consumed by two 75 hp fixed speed pumps or the one VSD pump.

Figure 2: The introduction of the VSD control much better controlled vacuum levels and reduce power consumption by 35%. Click to enlarge.

Figure 3: The VSD pump operation shows during non-production times, some leaking valves were identified by isolation. Watching the change in rpm showed the contribution of each leak to the system.  Total leakage was about 50% of the capacity of the VSD pump. Click to enlarge. 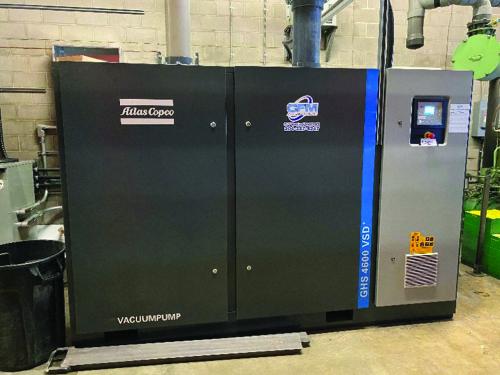 Figure 4: The new VSD pump is more efficient, produces less heat, and is much quieter than the old pumps.

This project has proven that introducing VSD technology to vacuum systems has a number of benefits.
“We now have a newer, more reliable, and more efficient system that much better meets our needs”, says Hayden Kent, SupremeX Winnipeg plant manager, “The system keeps the vacuum levels at our desired levels during full production and automatically cuts back its power consumption during our night shifts and on weekends.  And, as an added bonus, I notice it is much quieter and cooler over in that corner of the plant.”

This project shows the value of measuring a system both before and after a project to determine the savings, and that vacuum leakage should be assessed. Final verification found various unanticipated flows that needed to be attended to. As a result of the improvement efforts, the plant production is now running more efficiently, and more reliably, which gives management a high degree of satisfaction, especially when it comes time to pay the electrical bill.

Visit our Webinar Archives to listen to expert presentations on Industrial Vacuum Technology at https://www.blowervacuumbestpractices.com/magazine/webinars.