An envelope manufacturer is upgrading their vacuum system to include a new VSD controlled pump. As part of the preparation for the installation, an energy baseline was developed, and leakage survey conducted. The auditor used a newly developed acoustic imaging camera as well as a basic ultrasonic leak detector gun. This article describes what was found and some of the challenges faced in detecting leaks in a busy plant. 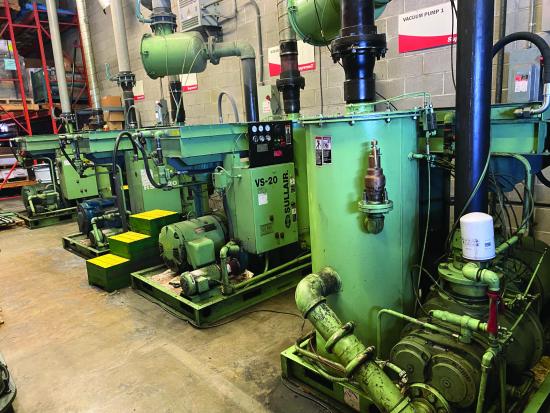 The facility has a vacuum system consisting of four, 75-horsepower (hp) air-cooled lubricated screw type pumps (Figure 1) rated at about 1,000 acfm each. The pumps are controlled individually with local pressure switches; however, the control of these devices is more or less manual, with personnel being trained through experience that they need to turn on more or less pumps depending on what manufacturing machines are running at any one time.

Data loggers were placed on the system to measure vacuum levels and pump amps. Figure 2 shows the operating profile for a one-week period. The measurement determined the vacuum system was consuming about 870,000 kWh per year, costing about $70,000 per year in electrical cost. It is interesting to note that the compressed air system consumption, which was measured at the same time, consumed 3.5 times less power. We can see by examining Figure 2 that the vacuum level is highly variable due to the manual control, swinging from a high of 26 inches Hg to a low of 16.5 inches.  Surveys of the production machinery set a desired vacuum level of between 18 and 20 inches.  Average level was measured at 23.5 inches, much higher than needed, causing greatly increased energy consumption.

The measurements were done to capture a baseline before a 100 hp variable speed drive vacuum pump is installed.  The company anticipates a 30% reduction in energy consumption will be achieved with this change.  However, extra savings can be gained if various vacuum leaks can be located and repaired. The goal is to find enough leakage so that one 75 hp vacuum pump can be turned off during peak production.

Profile showing highly variable vacuum level due to poor control.  This causes the system to consume much more energy than required. Enlarge.

A leakage survey of the plant was done using ultrasonic leak detection. The plant ambient noise level is very high due to the operating characteristics of the production machinery, so leaks cannot easily be located by ear. Ultrasonic leakage detection is very commonly used on compressed air systems but can also be used to find leaks on vacuum systems.

Ultrasonic leak detection has been around for many years. From the start, equipment suppliers realized that the human ear detection has huge limitations, especially in very noisy industrial settings. Loud background noise and other compressed air uses in typical industrial plants can very quickly mask any audible sound emitted by leaks, making the hunt an almost impossible task, even during quiet times during evenings and weekends.

Long ago it was discovered that a flow of gas moving from one pressure to another emits sound in the ultrasonic frequency spectrum. Using electronic mixing circuits this ultrasonic signature can be brought down to a frequency range that humans can hear, but at the same time general low frequency industrial noise can be filtered out. This gives ultrasonic detector operators “superhuman” hearing that allows gas leaks, including vacuum to be easily heard in noisy factory environments, even from hundreds of feet away.

Detection using ultrasonic guns typically uses a “point and shoot” method, where a directional audible pick-up device is waved around until something is heard in a certain direction. The operator then follows the sound, with the signal getting louder and louder as the detector approaches the source. Sometimes, when very near the leak, it is difficult to pinpoint the exact location due to various factors.  At times the leakage may be behind a protective barrier or up in an inaccessible location. Other times the leak might be in in a complex network of piping and hoses, requiring the operator to attempt to feel for the leakage within the many fittings, sometimes creating a safety risk.

A new, more efficient way of finding and recording leaks has recently been developed by various instrument manufacturers. This “visual imager” method uses a video camera to provide a live image, and an array of different directional microphones to create a “heat map” of ultrasonic emissions on top of the visual display (Figure 3). This device brings new meaning to the old saying “a picture is worth a thousand words”, producing an image representing both visual and audible signatures emitted by a leak, making the detection exercise a very much easier task. 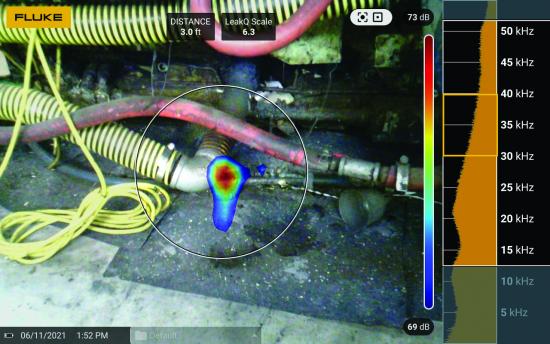 Profile a Fluke acoustic imager showing large vacuum leak on production machine. The compression connector was only hand tight in this case, but the vacuum force held it onto the machine.

When using an imager, the operator also “points and shoots”, but in this case the ultrasonic emission shows up as a live feed on the onboard video screen as a colored spot, making the location identification much quicker.  As the operator gets closer to the leak, the location becomes easier to identify, even when shooting through protective screens or pointing at locations out of reach in piping installed at ceiling level.

When shooting amongst other ultrasonic emitters, like a bench full of active compressed air powered tools, the leakage shows up as a consistent spot on the screen, with the tools being intermittent, so it is easy to differentiate.

Leaks on both compressed air and vacuum systems were located in the envelope plant using both an ultrasonic gun and a visual imager. The leakage detection was done both during production, when most machines were running, and at non-production times, when production was at low level during the evening.
By far the most challenging time to locate leaks was during production times. The main difficulty was the fact that there are so many ultrasonic emitters in a busy plant. These are:

The visual imager needs line of site access to any leakage, so it was found we needed to use an ultrasonic gun to locate the general area of the leak, which might be behind cover or at the rear of a machine, and then use the imager to find the precise location. By examining the visual image, the type of leak could be determined, so we could classify it as compressed air or vacuum, or some other noisy emitter. Detecting waste due to leakage during production was definitely challenging because normal compressed air consumption within the production machines also emits an ultrasonic signal.

During non-production hours the hunt for leaks was found to be much easier, with internal compressed air and vacuum uses turned off, only the leakage remained, and was easily detected. Some challenges remained, however, due to reflections. This is an issue for both the leak detection gun and the imager, sound bouncing off the surface of a component or wall can sound and look like a leak in a completely opposite direction (Figure 4) but is a false signal. Of the two detection methods, the imager was the easiest to use to resolve the issue, simply by moving the camera from side to side, the reflections could be discounted. 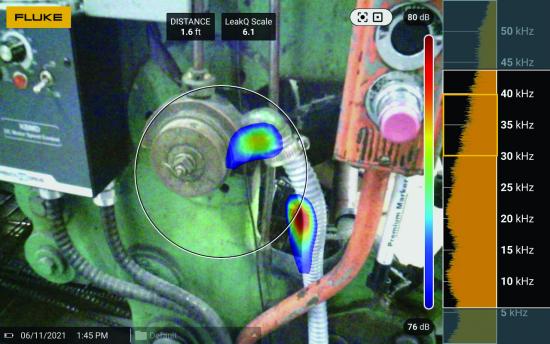 As with Figure 3, this connection was very loose. The colored spot on the lower part of the image from the Fluke acoustic imager is simply a reflection of the sonic signal from the leak above. This is easily resolved by moving the camera and observing which source remains fixed.

Another difficulty, commonly a problem when detecting leakage, is low pressure ventilation. As seen in Figure 5, the visual detector is showing a large ultrasonic signal coming from a port within a machine, however, this source was determined to be a fan powered suction pickup used to collect paper scraps, not a leak. 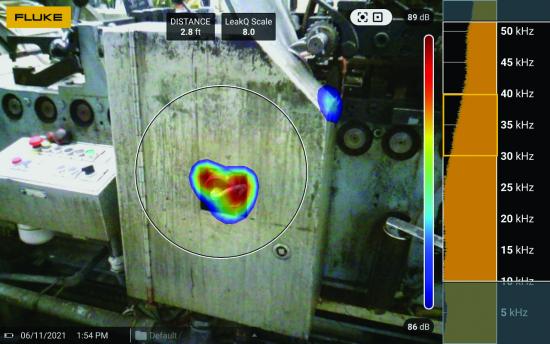 This image from the Fluke acoustic imager shows a large ultrasonic signal that turned out to be a legitimate low-pressure intake for a scrap paper collector.

Monitoring the vacuum system with data loggers helps determine the baseline for this system, which consumes, in this case, much more than the plant compressed air system. This baseline can be used by the customer to prove electrical savings to gain a significant utility incentive. Use of both ultrasonic gun and visual imager helps track down hard to find leaks and is especially effective if done during non-production periods.

About the Author
Ron Marshall is an experienced compressed air and vacuum energy auditor, technical writer, and Compressed Air Challenge trainer. He can be reached at email:ronm@marshallcac.com, tel: 204-806-2085.

Visit our Webinar Archives to listen to expert presentations on Industrial Vacuum Systems at https://www.blowervacuumbestpractices.com/magazine/webinars.