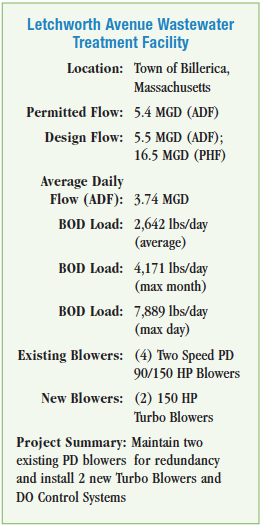 Every municipality and utility is facing the reality of rising energy costs. In 2010, the Town of Billerica, MA, which is located 22 miles northwest of Boston with a population of just under 40,000 residents, engaged Process Energy Services and Woodard & Curran to conduct an energy evaluation of the Town’s Wastewater Treatment Facility (WWTF) and pump station systems sponsored by National Grid. The objective of the evaluation was to provide an overview of each facility system to determine how electrical energy and natural gas were being used at the facility and to identify and develop potential cost-saving projects. 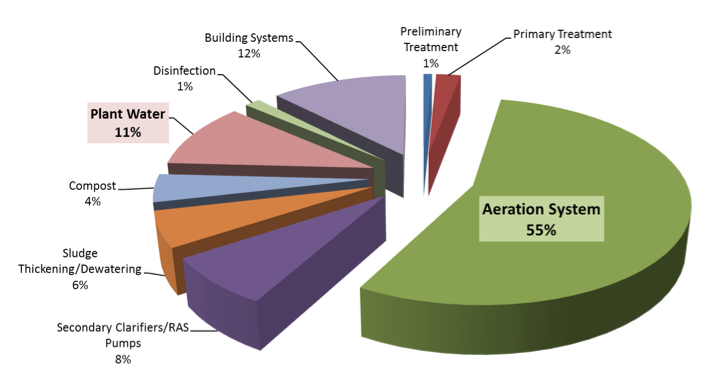 The evaluation recommended measures from upgrading thermostats to installing two new 100-horsepower blowers for the 5.4 MGD facility (ultimately 150-horsepower blowers were selected to improve operational flexibility). Building systems aside, these improvements would address the facility’s two largest process electricity demands, the aeration system (55%) and plant water system (11%) (Shown in Figure 1). The Energy Conservation Measures (ECMs) were bundled into a single project and included high efficiency turbo blowers with a DO control system for the secondary aeration tanks, a post-aeration DO control system, and new Variable Frequency Drive (VFD)-operated plant water pumps. When including incentives from National Grid, this $591,000 construction project had an initial projected payback at less than 6.3 years. Ultimately, National Grid funded 28% of the construction work for this upgrade.

This article focuses solely on the turbo blowers and aeration control system portion of the project and how these improvements reduced energy consumption at the WWTF, provided substantial environmental benefits through the reduction of greenhouse gas emissions, enhanced treatment capabilities, and saved the Town money. The final equipment configuration with the upgrades is presented in Figure 2. 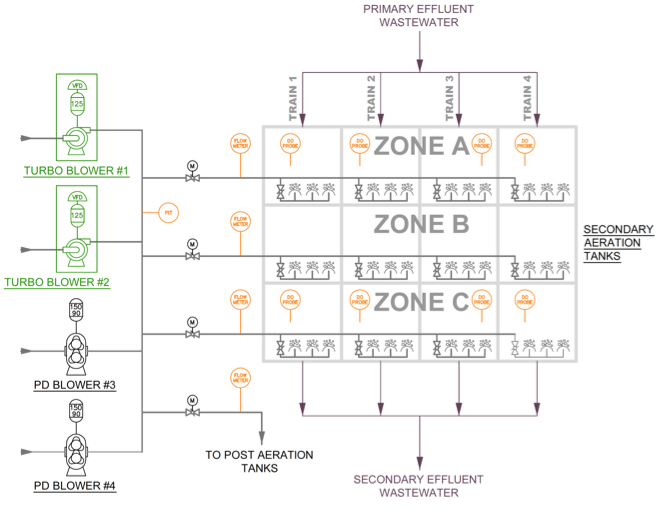 Background and Preliminary Energy Use Evaluation

The Billerica WWTF was originally constructed in 1966 to treat a design flow of 0.8 million gallons per day (MGD). Upgrades were completed in 1975 and 1990, which increased the design capacity to 1.6 MGD and 5.5 MGD respectively. At the time of the evaluation in 2010, the Town provided wastewater services for approximately 75% of the community and anticipated to expand the system to service up to 90%.

Before any changes as a result of the study were implemented, the evaluation found that the WWTF staff had done an excellent job of operating the facility efficiently. Results from the EPA’s Energy Star Portfolio Manager program for wastewater facilities showed a performance rating of 81. The national average was 50.

Prior to the improvements, aeration was provided by four, two-speed positive displacement blowers. This aeration system was the highest energy use operation at the facility, accounting for over 50% of the facility’s energy use. Due to the energy use and blower reliability concerns, it was apparent that new blowers were in order as the existing positive displacement blowers dated back to 1987.

The WWTF’s four tanks were equipped with ceramic diffusers that originally provided full floor coverage. Some diffusers, installed over 15 years ago as part of a complete aeration system upgrade that replaced surface mechanical aerators, had become clogged or had been removed. There were known leaks in the tank piping that certainly resulted in inefficiencies. As such, improvements to the blower and diffuser systems would be key factors to improving efficiency.

Aeration system blowers installed more than 10 to 20 years ago typically have limited or no flow control capability. In fact, some systems blow off air when the demand is low. Billerica’s system had utilized two-speed blowers to assist with matching demands. In 2009, the WWTF operated its blowers manually and set high enough to handle anticipated peak load. For example, after manual field DO measurements were taken on each tank, two blowers might be operated on low speed or one blower on high speed. At times this resulted in excessive DO values.

It was found that defunct DO sensors needed to be replaced with new low-maintenance Luminescent DO (LDO) probes. A cost-savings measure of installing 8 probes instead of 12 in zones A and C only of each train and calculating the DO in Zone B was employed with success (Figure 2). It was later determined that the average of the two zones was a good approximation of the middle zone B. 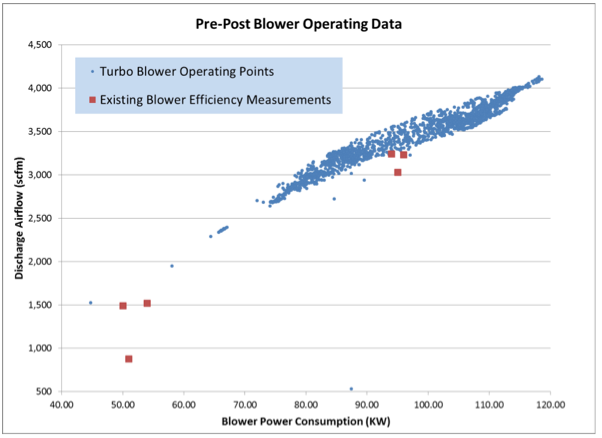 A new blower and control system would provide an increase in efficiency due to improved technology (attributed to turbo blowers) and real-time flow control (attributed to the turbo blower’s VFD and the DO control systems). Based on Woodard & Curran’s experiences, Billerica’s WWTF is at the cusp of where Turbo Blower energy savings are able to provide a cost-effective project. At smaller facilities, the up to 20% increase in energy savings based on the improved technology can be outweighed by the cost increase of upgrading to a turbo blower. Most turbo blowers are package units containing the following key components: blower, motor, PLC/control system, blow-off valve, harmonic filter, and a cooling system. A centrifugal or positive displacement blower is typically limited to a blower and motor and therefore can be obtained at a much lower cost. Still, it was clear that Billerica would save money over time with more efficient turbo blowers.

The majority of savings can be attributed to matching the blower output to the aeration demands of the system. The DO control system monitors DO levels in the process tanks and, via the SCADA system, adjusts blower output by adjusting the speed of the blower. The system distributes flow by opening or closing control valves on the air discharge pipes to the aeration tanks. In Billerica’s case, four control valves were installed, one per each of three zone header pipes as well as the post-aeration tank. Air flow to the four trains of each zone is manually adjusted to evenly distribute air flow and is infrequently adjusted as needed. The post aeration tank typically does not require air for process demand and therefore can be turned off. However, Billerica frequently allows a small amount of air to be discharged to the post aeration tank to prevent any remaining solids from settling out in this tank.

An unexpected condition observed in distributing air flow to the process tanks was that the quantity/ccondition of aeration diffusers in each zone impacted the respective air flow. This was identified by observing the control valve position and resulting flow in each zone. Due to the limited throughput of the diffusers in zone C (the final zone), at higher air flow the diffusers controlled air flow and the valve position had little to no impact on adjusting flow. Fortunately, this is generally not a concern as most of the air is utilized in Zone A, significantly less in Zone B, and the least in Zone C, often on the order of magnitude of 2,200, 800, and 500 scfm respectively. Zones B and C require minimal process air to satisfy the oxygen demand, but they require aeration for mixing. Based on an EPA value of 0.12 SCFM/SF, each zone requires approximately 750 cfm for mixing purposes. Thus, Jeff Kalmes, the operator at the WWTF, is able to improve their energy savings by operating at a lower mixing air flow rate (periodically “goosing” a zone to flush out any solids that may have settled).

Construction began in late 2011 and was completed in the summer of 2012. Figure 4 presents both blowers installed during the construction phase. Construction included several site constraints, including: fitting the blowers through a 5’x5’ opening in the ceiling and lowering them into the below-grade blower room, removing two of the existing blowers (which were discovered to be supported with welded rebar encased in concrete), and sequencing this work while maintaining existing plant operations. The contractor was able to successfully navigate these issues, which included dismantling the blowers to fit them through the ceiling opening. As with any construction project of this nature a period of troubleshooting and optimization was required to achieve reliable facility operation. Communication during this period is critical for a successful project. The manufacturer, Houston Services Incorporated (HSI), recently acquired by Atlas Copco, made a series of trips to the site throughout the construction period, each time making adjustments to the blowers and addressing concerns as they came up. Turbo blowers have become prevalent over the last five years, but it does need to be noted that this is still a newer technology and may take some effort to operate with optimal results. 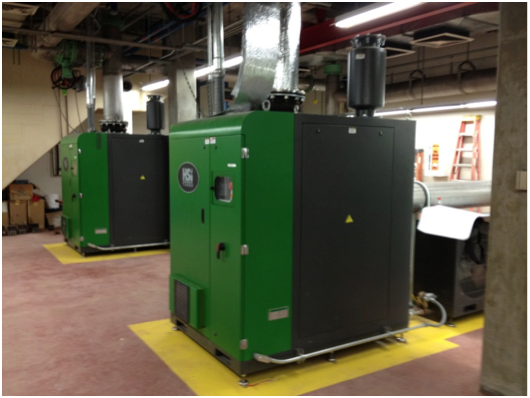 The National Grid incentives required a post-installation inspection and two weeks of data collection to demonstrate the effectiveness of the installed ECMs. Since it has been about a year since installation, it’s possible to review the annual electricity usage at the WWTF.

The Facility had undergone several significant upgrades over the last decade, which included discontinuing composting operations, replacing the belt filter press with a rotary press, and most recently the addition of the CoMag tertiary treatment process for phosphorus removal. These changes make it difficult to compare recent energy use figures with data prior to these improvements. In order to compare apples to apples, only the 2011 and 2012 data could be evaluated. The new turbo blowers became operational in February 2012, which allows the remaining 11 months of 2012 to be compared to the prior year. As presented in Figure 4, both years exhibit similar electricity use trends, but the 2012 data exhibits up to a 25% energy reduction with an average reduction of 20%. While a precise cost savings cannot be calculated because of the time of use billing employed at the facility, this project resulted in an approximate cost savings of $39,000 and a greenhouse gas emissions reduction of approximately 128 metric tons of carbon dioxide equivalent (MtCO2e) annually. 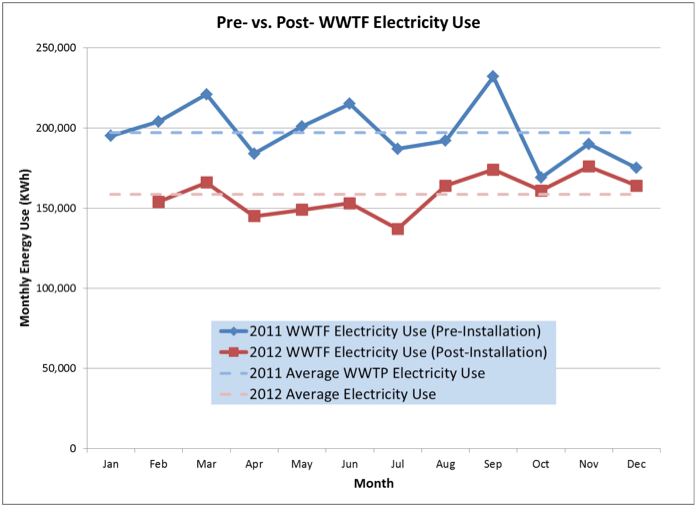 The energy efficiency project was successful in meeting both process improvement and energy reductions. Furthermore, the environmental benefit of significantly reducing greenhouse gas emissions was achieved. Annual energy savings of $39,000 justified the cost of the improvements at the plant. These construction costs will be recouped in less than eight years in part due to the incentives from National Grid.

While a variety of startup issues were encountered, the turbo blowers have continued to run without interruption since the summer of 2012. The Town continues to optimize their control system and at times will “stress” their process systems to further develop their understanding of the treatment processes and how the system will respond. Jeff Kalmes indicates that an upcoming project to identify a replacement or cleaning strategy for the existing ceramic diffusers is currently under discussion. The current challenges would be taking a treatment train offline and emptying the tank for the inspection. Addressing the diffusers will be the final component of a successful project, which will provide an optimized aeration system at the Billerica WWTF while maximizing energy savings.

The author would like to thank the following contributors to this paper: Lorraine Sander, Superintendent – Wastewater Division, Town of Billerica and Jeff Kalmes, Laboratory Technician – Billerica Wastewater Treatment Plant