How to Choose Vacuum Pumps for Chemical Distillation


To determine which type of vacuum pump will be most suitable for an application, it is important to understand the distillation process, the factors that make distillation work, and the features of the different pump types.

How Does Distillation Work?

Distillation, degassing, drying, filtration, membrane separation, adsorption, and crystallization are all among the separation processes that rely on the differences in the physical properties of substances in a mixture. Distillation relies on the differences in boiling point or in vapor pressure versus temperature characteristics. Heating, evaporation, and condensing are the tools used in distillation that separate the liquid constituents in a liquid mixture.

For separating liquid constituents with differences in boiling points of less than 30 °C, a fractionating column with plates or packing is normally recommended. This provides repeated condensing and re-evaporation of the reflux liquid as it progresses up the column for better separation of the constituents. 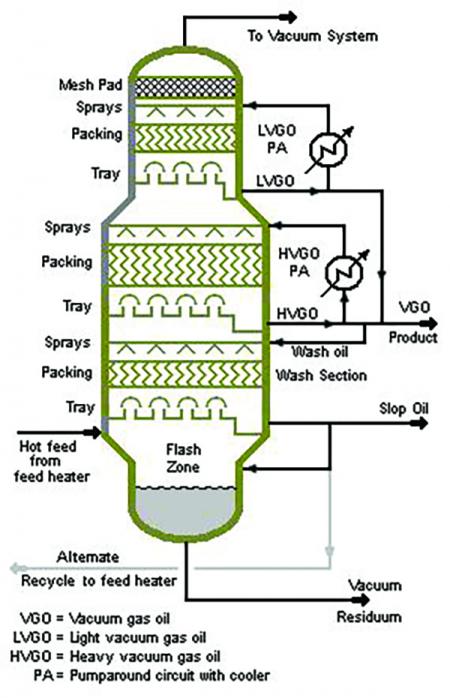 Depicted is an example of distillation column set-up for separation processing.

More volatile liquids have lower boiling points or higher vapor pressure versus temperature curves and more readily evaporate. The vapor phase mixture is richer in the more volatile compounds and can then be condensed, contained, and returned for further separation and purification, if necessary. The greater the difference in the volatility of a component from the mixture, the more easily it is separated.

Volatility of substance “i” is defined as:  Ki = yi/xi. Where,

The ratio is the same between a substance’s pure component pressure and its total pressure:

Since yiP = xiPvi, where P is the total pressure and Pvi is the pure component vapor pressure: then yi/xi = Pvi/P.

For a simplified binary mixture that behaves as an ideal liquid, a phase diagram at constant pressure can be drawn with the mole fraction of the more volatile component on the horizontal axis and the temperature on the vertical axis.

As an example, Figure 1 represents a phase diagram at constant pressure for a well-behaved binary mixture. It shows the mixture will boil at 0.59 Temperature (T) when the more volatile Component 1 represents 0.3 mole fraction of the liquid mixture and will have a saturated vapor “y1” that represents almost 0.75 mole fraction of the entire vapor. This large difference between the vapor and liquid contribution of Component 1 makes it easier to distill off. 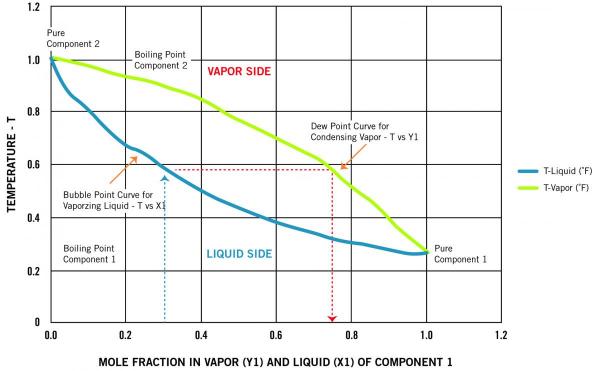 For a simplified binary mixture that behaves as an ideal liquid, vacuum distillation provides a convenient and efficient format for the separation at lower temperatures without harmful reactions with other gases such as oxygen.

In some cases, a mixture of two or more liquids at a given mole fraction of constituents will behave as a pure liquid, where the vapor that boils off at a constant temperature has the same mole fraction in the vapor phase as in the liquid phase and no further separation of the constituents occurs. This is known as an “azeotrope.” For example, a mixture of ethanol and water will separate through simple distillation until the mole fraction of ethanol reaches 0.895  and no further change in concentration will occur.

Molecular distillation is a similar process but occurs at much lower pressures (normally from 0.1 to 0.0005 mm HgA) so that collision of the distillate molecules with the condenser predominate compared to intermolecular collisions.

A thin film distillation process using Wiped Film Stills (WFS) and Evaporators (WFE) provides a convenient method for separating out compounds for the chemical, food, or pharmaceutical sectors that have high boiling points, or high viscosity, or are sensitive to thermal degradation but are readily evaporated at modest temperatures at low pressures.

Condensers are used for knocking out most of the condensable vapors. However, for removing the permanent gases, including air leakage and the saturated vapors at the exhaust temperature of the vent condenser, the most common and preferred pumps for simple or fractional vacuum distillation are the liquid ring and dry vacuum pumps. For lower pressure operation, a Rotary Lobe Booster can be connected in series with either of these to provide higher pumping capacity at a lower pressure.

The liquid ring does not require internal lubrication and can run on most liquids such as water, low viscosity oil, or many solvents that are compatible with its materials and its process in terms of vapor pressure and viscosity. It can handle liquid slugs from process upsets or a continuous flow of liquid condensate from a pre-condenser.

In some cases a liquid ring can perform as both a vacuum pump for non-condensables and a direct contact condenser for vapors, increasing its overall pumping capacity. It is one of the most reliable and durable mechanical pumps because of its simplistic design with one rotating shaft assemblage. It is also available in 316 stainless steel for greater corrosion resistance to process effluents. 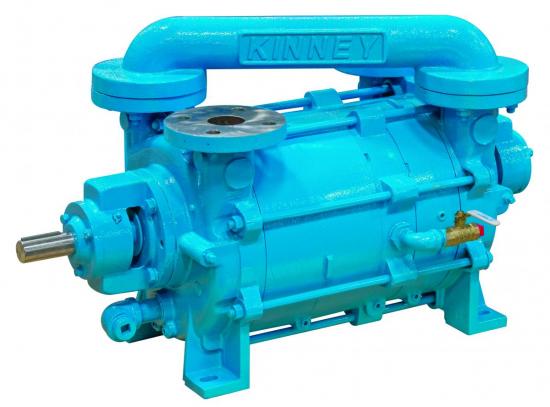 The rotary screw dry pump also does not require internal lubrication and can handle some liquid carryover, but as the name implies, it is better to keep the pump dry for optimum performance.

Knockout pots would normally be recommended to trap out liquid slugs. Since the dry pump contains no liquid within its pumping chamber, it is not limited by the vapor pressure of the liquid and can achieve lower pressures without producing process-contaminated waste products. The dry pump handles condensable vapors by keeping them in the vapor phase at an elevated temperature while traveling from suction to discharge, so they can be condensed out in an after-condenser. The rotary screw dry pump and rotary lobe boosters are also available with optional protective coatings. 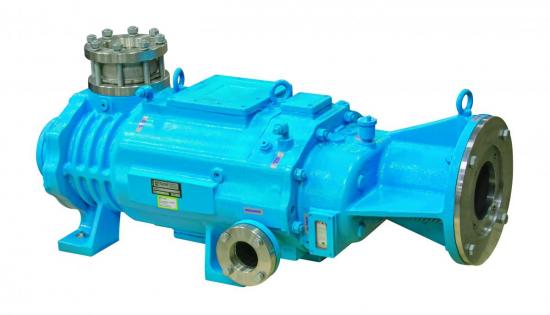 Here are advantages and disadvantages of liquid ring and dry pumps: 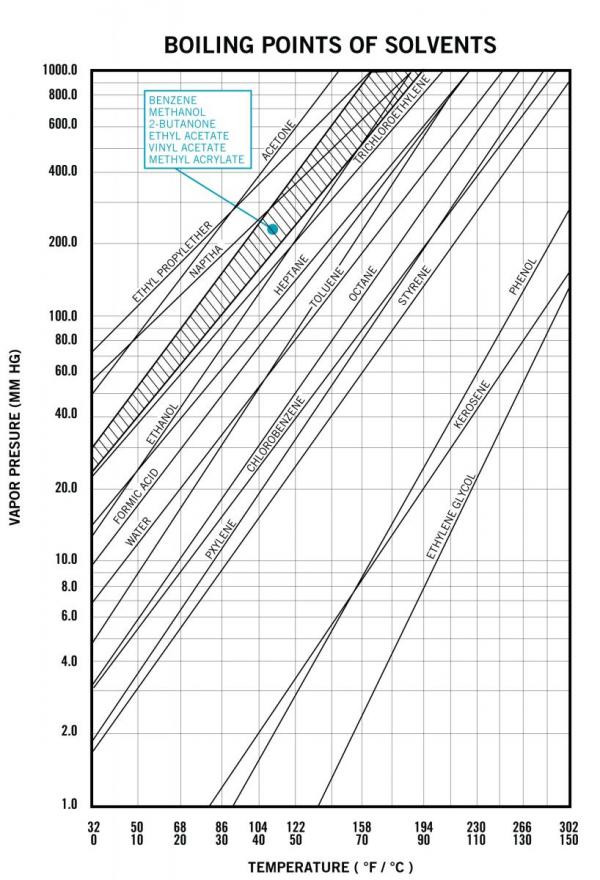 Tuthill Vacuum & Blower Systems was formed in 2002 after a series of acquisitions and corporate restructuring. Currently, the company is the sole manufacturer of Kinney® vacuum pumps, along with M-D PneumaticsTM rotary blowers, vacuum boosters and vacuum pumps. Several recent additions to the Tuthill team have helped to broaden the company’s engineering capabilities. The process began with the hiring of Roger Palmer, the new Director of Engineering. Under Roger’s direction, Tuthill’s team is looking at all existing products to identify opportunities for enhancement in performance and improvements in the manufacturing process, daring to make better every day. For more information, email vacuum@tuthill.com, or visit www.tuthill.com.