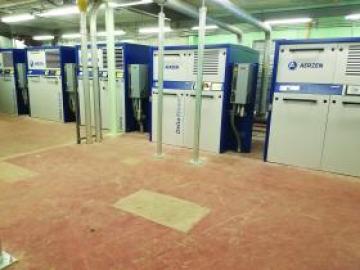 A small site located within a floodplain, prone to erosion, and currently occupied by an existing in-service wastewater treatment facility is not at the top of any engineer’s list for a desirable site to expand a wastewater treatment plant or reclamation facility. However, these challenges created opportunity for specialized solutions during the design of the facility expansion; in particular, in designing the aeration and digester blower system.

Aeration blowers receive a lot of attention from design engineers, suppliers, and end users. That is understandable since blowers account for more than 50 percent of the energy used in a typical wastewater treatment plant (WWTP). They represent “low hanging fruit” for energy conservation measures in wastewater treatment!

The wastewater treatment plant in the Town of Hurlock, Maryland provides service to approximately 2,100 residences. However, the majority of the water treated comes from a nearby poultry processing plant, giving the plant influent a high organic content. That is why the Town of Hurlock replaced its two million-gallon-per-day (MGD) lagoon plant with a 1.65 MGD four-stage activated sludge facility ten years ago. After construction was completed, operating costs of the new plant were significantly higher than before. This meant the town had to get creative in order to keep costs down for their ratepayers.

Bird Island Wastewater Treatment Plant (WWTP) in Buffalo, N.Y., had an inefficient aeration control system that, ironically, had been installed in 1998 as an efficiency upgrade. The operating principle was that air flow to all 32 of the plant’s aeration basins, or zones, would be properly controlled by an average of several Dissolved Oxygen (DO) level measurements taken by DO probes in a few of the basins. However, changes in tank loadings and physical dynamics, along with differences in oxygen transfer rates between diffuser grids, prevented a uniform air flow in the aeration zones.

The Ilmajoki sewage treatment plant (STP) located in southern Finland was built in the mid-1970s during a boom of infrastructure construction. Over time, industrial presence in the Ilmajoki area grew, and the plant saw an increase in flow of industrial effluent—or liquid waste and sewage. As the amount of influent increased, the plant was no longer able to meet required performance criteria suffered from a severe lack of oxygen—particularly during peak loading times.

Hoffman & Lamson has been manufacturing multi-stage centrifugal blowers for a long time. Lamson was founded in 1880, and Hoffman was established in 1905. Now a single entity under the Gardner Denver Nash Division, the company has some serious resources to complement its 100-plus years of blower expertise.

The design of wastewater treatment plants is changing, and it has something to do with LEGO® bricks. More specifically, it has to do with how large and complex LEGO structures are built. If you follow the instructions carefully, you build module after module, eventually piecing them together to create a fully functional and cohesive unit.

A replacement strategy for air compressors and blowers integrated into a system-level approach towards energy efficiency can deliver significant energy savings and optimize equipment performance. At the Victor Valley Wastewater Reclamation Authority, a blower replacement project yielded annual energy savings of more than 928,000 kWh and $98,000 in energy costs, while improving the reliability of its secondary treatment process. In addition, the agency qualified for important incentives from its electric utility — significantly improving the project economics and resulting in a 2.94-year payback.

The overall wastewater treatment process is complex, and each step is integral to ensuring water is properly purified. Effluent ends up in the plants, containing substances that must be removed before the water can be properly cleaned and returned for use. The range of potential contaminants is almost endless and can include food, pulp, waste, or other substances. Afterwards, the water requires further scrubbing, with the aid of bacteria. It is in this part of the process that compressed air (ideally provided by energy-efficient rotary lobe blowers) plays a vital role.